Sandall Park, affectionately known locally as the ‘Boating Lake’ as not always a boating lake or public park. What is now a cafe, used to be two cottages inhabited by the Frost family.

Mr William Frost and his family moved into the cottages which were built in 1841, after the closure of the brick works which dominated the site. The cottages were without electricity and water had to be brought from along the street from a communal pump. At that time, there were no houses between the cottages and Doncaster town, it was all woodland.

The lake is a direct result of clay extraction from the area, required
for the production of bricks and the excavation was filled with water to provide what we see now. Initially, there were several ponds, two became one to make the larger lake.

William Frost grew vegetables and produce on the land where the elderly persons bungalows now are and took them on his horse and cart into Doncaster town for sale, in addition to selling them from a stall outside the cottages on Thorne Road.

His horse and carts, together with his cattle, were kept in open fronted sheds which were a legacy from the brickworks. Apparently Mr Frost was a business man, and diversified into selling his wares in a cafe which was opened in a back room of one of the cottages. His customers being mainly the fishermen who paid to come to fish the lakes.

In 1940, although war had broken out, the lake was opened as a park and boats were introduced onto the lake. As residents in the ‘park’ the Frost family, including a young Florence Frost (who, aged 93, kindly provided these details) were invited to be the first guests to experience the new boats. Florence eventually married and moved into the adjacent cottage to live with her husband.

Florences’ parents remained in the cottage until their deaths (albeit the Corporation had tried to persuade them to leave!) and they were finally demolished in 1956 upon the death of her father Arthur.

Further details about the history of Wheatley can be downloaded by clicking here. (PDF 91.8kb)

A book has now been produced by local Doncaster historian Symeon Mark Waller about Sandall Park – Past and Present (£6.50) . You can order the 54 page full colour book by contacting us via our ‘Contact Us’ page. 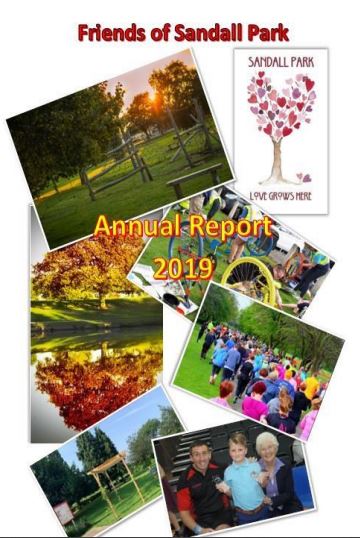 It is with the deepest sadness that we have to i[...]

Jackie's Tree on the Tree Trail

Ice on the Lake

Christmas message from our Chairman

You will of course be aware that the Doncaster[...]